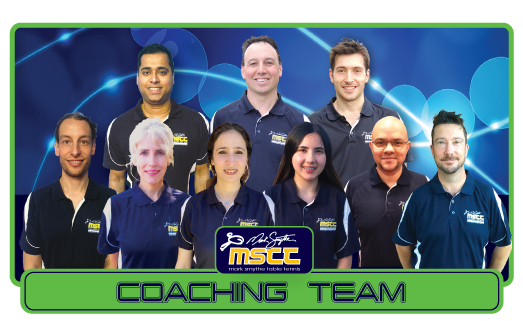 Mark Smythe is Founder/Owner/Director/Head Coach of MSTT plus Founder & Owner of RFL.  Both MSTT & RFL principle sponsor is the TACTIX brand - supplier to Bunnings hardware stores around Australia.

Mark created MSTT and RFL in late 2012. To hear some comments from Mark about MSTT click, MSTT program. After a successful playing career, he focused on coaching and has been considered Australia's premier Coach for many years. Some of his credentials as an athlete and coach are,

Inducted into Table Tennis Victoria Hall of Fame in 2015

MSTT has a high quality team of coaches that includes 2 Olympians, 3 Commonwealth Games members (one of them won Gold Medal) and 2 National Singles Champions. To view profile of each click, MSTT Coaches profiles

MSTT offers players a wide range of options including,

All aspects are professionally organised. More details about each aspect can be seen in the menu bar. There is also a range of free material to help increase knowledge to improve your standard, including a collection of articles that hope to inspire you and start playing at a local Club.

To utilise any of MSTT services or make an enquiry, contact Mark on 0411 493 054 or ducksmythe@hotmail.com

MSTT is proud to have the following sponsors on board,